Several people have asked about volunteering at vaccination centres. Here is a response that I have received:

If people want to register to volunteer for marshalling, etc., at the Guildford & Waverley Covid-19 Vaccination Centres, they can go to the Voluntary Action South West Surrey website and there will be a link generated when it’s active, but there is nothing available at the moment because the first month of shifts/roles has been filled. So, the advice is to keep checking! Once open again, the different roles can be accessed by going to our website (https://voluntaryactionsws.org.uk/), clicking on “View local volunteering opportunities” and scrolling down to ‘NHS Volunteers’ and clicking into it.

If you or a relative are in need of any help in these tricky times, please contact 07873 383954 or email haslemerehelp@gmail.com

In a bid to help local residents, the group collected the names of those willing to provide volunteering support for their neighbours, and since then these volunteers have been successfully performing tasks such as shopping for essentials and delivering prescriptions.

A founding volunteer, Narn, said: ‘When the call went out for volunteer help, we knew many in Haslemere would step forward. Haslemere is a community which has always had a volunteering ethos.

‘I am full of admiration for those who have volunteered and, whilst I would have expected nothing less, it is still overwhelming to see the kindness and consideration from those contributing voluntarily.

‘We have fielded 100s of phone calls to our helpline which is being manned by John Robini, our town mayor, 100s of Facebook messages and innumerable e-mails all needing help with prescriptions, shopping and an ear to listen and have a friendly chat. Our volunteers have also picked up wheelchairs, delivered flowers, collected plastic surgical boots and delivered hearing aid batteries. ‘

Surrey County Councillor, Nikki Barton, has actively supported Haslemere Help and worked to streamline the Haslemere Health Centre’s prescription delivery service using the group’s volunteers. Councillor Barton told us: ‘The queues at the health centre are often long, putting great pressure on the pharmacy team. We have arranged that you can now call 07873 383954 or alternatively you can make contact by e-mail haslemerehelp@gmail.com with your prescription pick up request. Patient contact and delivery details are all that is needed. Haslemere Help will not keep any of your personal details and any collections will be treated in confidence. “

On Twitter, Haslemere resident, Miles Weston who is currently self-isolating at home has received invaluable neighbour support. He wrote: ‘This is what community-minded, unnamed people in Haslemere are doing for their neighbours. We know them, we love them for what they are doing and we admire them for not being on the lookout for public recognition. They are not bragging – they are just doing it for Haslemere.”

Haslemere Mayor, John Robini said: ‘The volunteers’ efforts and commitment, together with all those employed in delivering crucial services at this time, should lift our spirits and give us all encouragement during what is, undoubtedly, a troubling and challenging time for our town. The town council staff have also provided invaluable telephone and administrative support.’

Individuals and community groups throughout Haslemere looking to provide volunteering support during Covid-19 can still register and are encouraged to complete a Volunteer Registration Form. Residents who need help with shopping, prescription pickups or other services should call the Haslemere Help service on 07873 383954. Enquiries can also be channelled to haslemerehelp@gmail.com and through their dedicated Facebook page www.facebook.com/haslemerehelp.

These are my presentation slides:

Sharing a guest blog post written by local business man, David Goddin. David is a volunteer for the Haslemere Community Rail Partnership and set up the website which you can see here. David writes:

There’s a powerful new force spreading across UK railways. It has the capacity to make a real difference for the travelling public – and local economies across the nation. It’s called community rail.

In essence, community rail is groups of volunteers – often with the backing of local business and other organisations – who adopt ‘their’ stations and work alongside the train operators and Network Rail to enhance facilities and make them more attractive for regular travellers and occasional visitors.

Irrespective of any arguments on how the railways are organised, the fact is that the infrastructure and rolling stock needed to provide any reasonable service requires huge investment. And there’s not much left for frills.

Sure, Network Rail and the TOCs could do more for local stations – but inevitably at a cost to the passenger and the taxpayer. The likely result would probably also see a blanket range of improvements with little chance of station individuality.

Community rail, on the other hand, draws on funding from local and central sources to finance individually tailored and locally driven projects to enhance the interface between train and the area a station serves. If these projects are a success, they could help to boost ticket sales for leisure travel – making off-peak train services more profitable.

I became involved in this non-political movement when our local chamber of trade and commerce was showing interest in a local initiative to form a community rail partnership (CRP). We worked together with a number of other local voluntary organisations, as well as the town council, the South Downs National Park Authority and, more recently, the Surrey Hills Area of Outstanding Natural Beauty, to create the Haslemere Community Rail Partnership.

This was made possible through ongoing support from the Association of Community Rail Partnerships (ACoRP) and our TOC – originally South West Trains and now South Western Railway.

As with many other station adoptions, we have a small team who regularly tend the station’s flower beds. But our activity goes much further.

Haslemere was fortunate to have a vacant small retail premises on the station forecourt, next to the ticket hall and gateline. The CRP has been able to take this over to use as an ‘information hub’, staffed by volunteers who share local tourist information, maps and leaflets with visitors – especially those wishing to enjoy the abundance of walking and cycling routes in our area.

The Information Hub exists to extend a warm welcome to visitors, helping them to choose destinations and routes that suit their taste – both scenic and commercial. We are fully aware of the importance of the tourist pound, and every one that visitors spend here is a win for the local economy.

We are currently negotiating for alterations and improvements to the Hub, to create additional space and greater visibility –­ both to visitors and the thousands of commuters who pass it each day. The improved Hub will provide enhanced publicity opportunities for local organisations. We also hope that it will lead to an increase in volunteer numbers, facilitating longer opening hours.

In another exciting development, our CRP has just been upgraded to the Surrey Hills to South Downs Community Rail Partnership which will see our influence spreading northwards through local volunteers at four as-yet unadopted stations: Witley, Milford, Godalming and Farncombe – with all of which we have much in common.

Right now we are working on a range of ideas for projects that could win central funding and contribute significantly to an improved travel experience through Haslemere, which this year celebrates 160 railway years.

Community rail is highly regarded in official circles, as were reminded at the recent ACoRP-led Community Rail in the City event at London Waterloo in ad hoc face-to-face contacts with Andrew Jones MP, Parliamentary Under Secretary of State, responsible for railways, at the Department for Transport, and Sir Peter Hendy, Chairman of Network Rail.

So what do I see in it? Well, aside from the opportunity to make a small voluntary contribution on the fringe of the rail sector (partly appeasing the long-held boyhood desire to be an engine driver) community rail has much to offer to a wide range of businesses. That strengthens demand for communication – and that’s the challenge I thrive on.

Do you have up to an hour free this afternoon from 2pm? Meet us at the info hub to go on to weed the flower bed on the south side of platform 2/3 .. bring your kneeler, gardening gloves & fork! #haslemere #volunteering

Here are some pictures of the Haslemere volunteers who helped move the new flagpole from JE Homewood‘s yard to St. Christopher’s Church yesterday. This is part of the Haslemere Great War Centenary Memorial. (More here, here and here.) Thanks to patient drivers on Wey Hill who waited as the flagpole was moved). 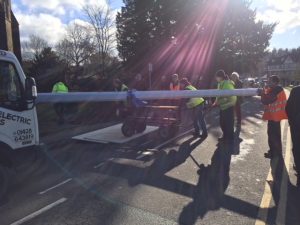 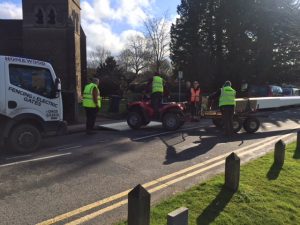 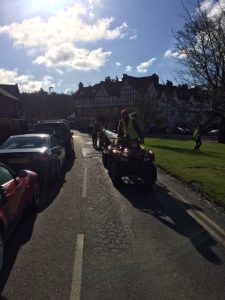 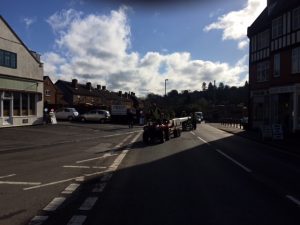 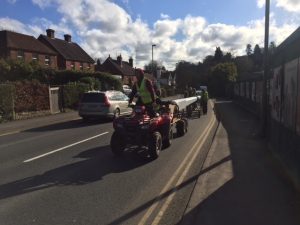 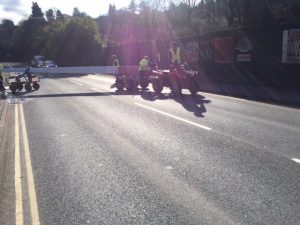 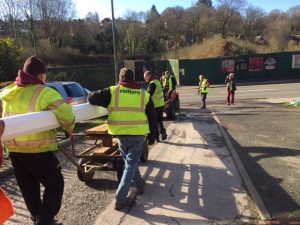 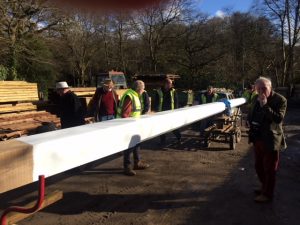 The flagpole is being raised by crane to the top of the Church Tower next Tuesday, 17th April,  from 10:00 am.

In Haslemere today, some of the lovely volunteers who, as part of the Haslemere Community Rail Partnership team, helped clear the station’s flower beds on the platform. The daffodils are now looking gorgeous. 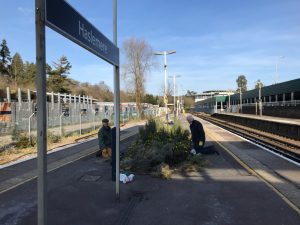 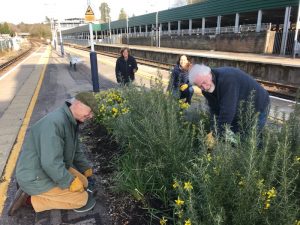 What a great improvement! Lovely to see the sun and blue sky too after the snow.

I have been asked to share this update from the Haslemere War Memorial team: 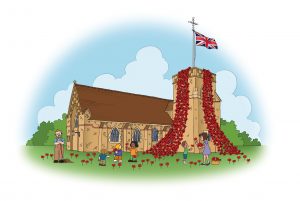 Please note that tomorrow Friday 16th March, will be the last day of poppy pinning as the two nets for St Christopher’s are complete. However, there are still poppies to use for decoration, so we fully intend to continue preparing the remaining poppies for other nets and we will announce when we start doing this in due course, but we have decided to have a breather for the time being and take stock.

A huge thank you to all the volunteers who contributed to completing the task in about half the time we expected. Many volunteers have taken boxes of poppies home with them to prepare them for pinning with drilling and threading. Many of the poppies have been stiffened up with backing material in order to brave the elements more readily.

On the 24th March (Saturday week) between 10.00 am and 1 pm we will be starting the next part of the project, sowing the poppy seeds into trays and distibuting them around the community for nurturing in various greenhouses around Haslemere. The sowing will take place at St Christopher’s and on St Christopher’s Green – weather permitting. Volunteers all welcome.

Big thanks to the community volunteers who helped this morning clearing the bedding on the platforms at Haslemere station. We’ve more to do and will send a call-out after half term.

Here’s a before and after picture from today: 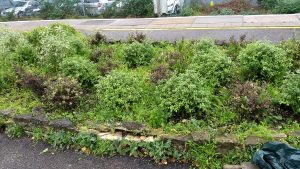 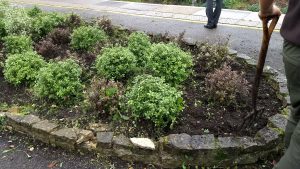 And, a picture of the community volunteers. Thanks! 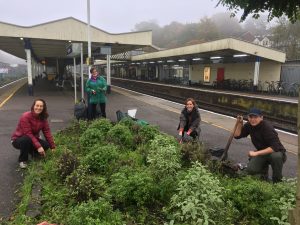 ACoRP – the Association of Community Rail Partnerships – is the membership body for almost 50 community rail partnerships, representing over 80 community rail lines across the UK, as well as more than 1,000 station adoption groups.

The Haslemere Community Rail Partnership was established in October 2015 with the purpose of promoting Haslemere and its surrounding countryside, to promote rail travel to the town as a more sustainable travel mode and to improve the station and forecourt environment. You can read more about it here in this town council document and here in a past update on this blog.

In Haslemere today, I spent a few hours weeding and tidying the flower beds on the platform. There is more work to be done! 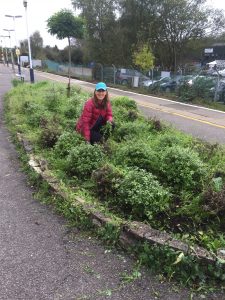 If you are free for an hour or two on Thursday morning from 9am, please do come along with gardening gloves for some gentle weeding. I’ll bring a flask of tea for us to share.