Maria and Nikki here. We enjoyed campaigning in the High Street this morning with supporters.

We had a mixed range of comments about being independent candidates and standing for the town council. 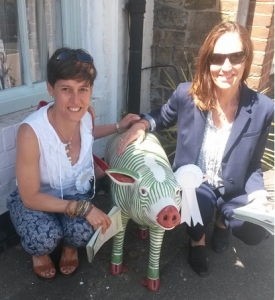 I’ll be supporting those independents – it’s just not healthy to have all that party politics in a town council.

I like the sound of those two – pity I didn’t register to vote, I will for next time.

I have voted already by post. You both got my vote.

I’m crossing my fingers to hope they do get elected. We need them on the town council.

I’m in Shottermill but I would vote for those independents if I could.

I live in Courts Hill Road and I love the new lighting in Sandrock that I read about in your leaflet. So my wife and I voted for you.

There should not be party politics at local level.

We’ll be out campaigning again tomorrow and we look forward to meeting more voters.

you have TWO VOTES

Maria Mateo will be standing as an independent candidate for the Haslemere South ward in the upcoming Haslemere Town Council by-election on 8th June.

Message from Maria Mateo and Nikki Barton: We began delivering our Haslemere Town Council campaign leaflets on Saturday and then stopped campaigning due to the Manchester attack.

Today, we resumed campaigning with a team of great volunteers in Haslemere South sharing the work by helping us deliver our campaign leaflets.

Do let us know if you have a few spare hours to help support our campaign. #VoteIndependent 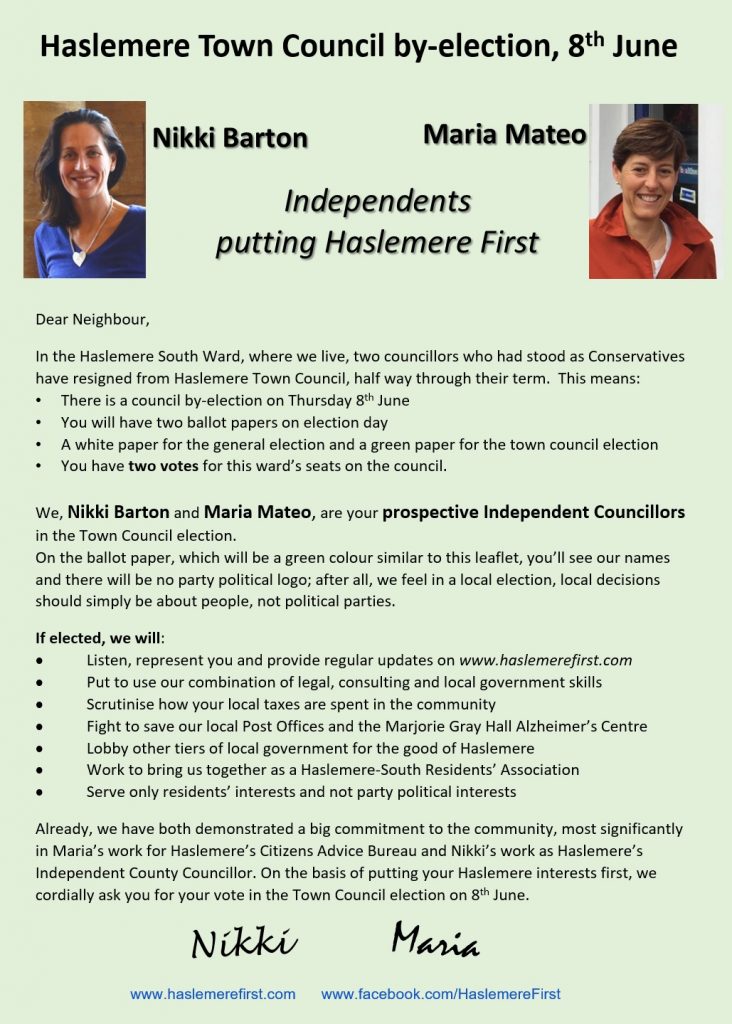 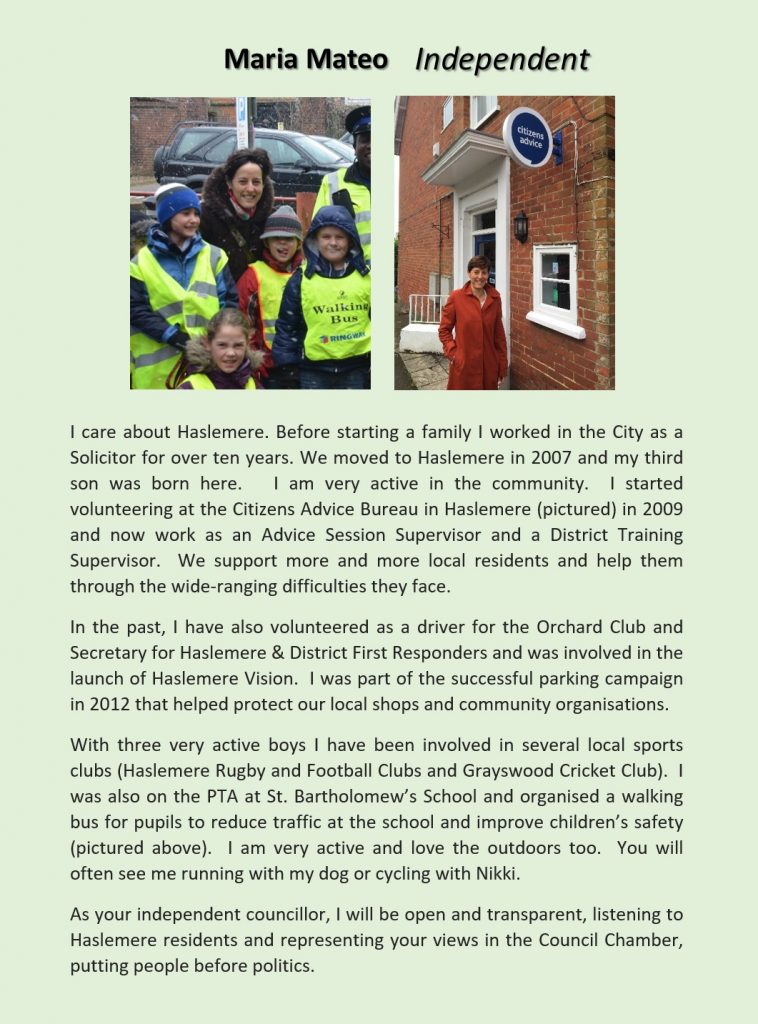 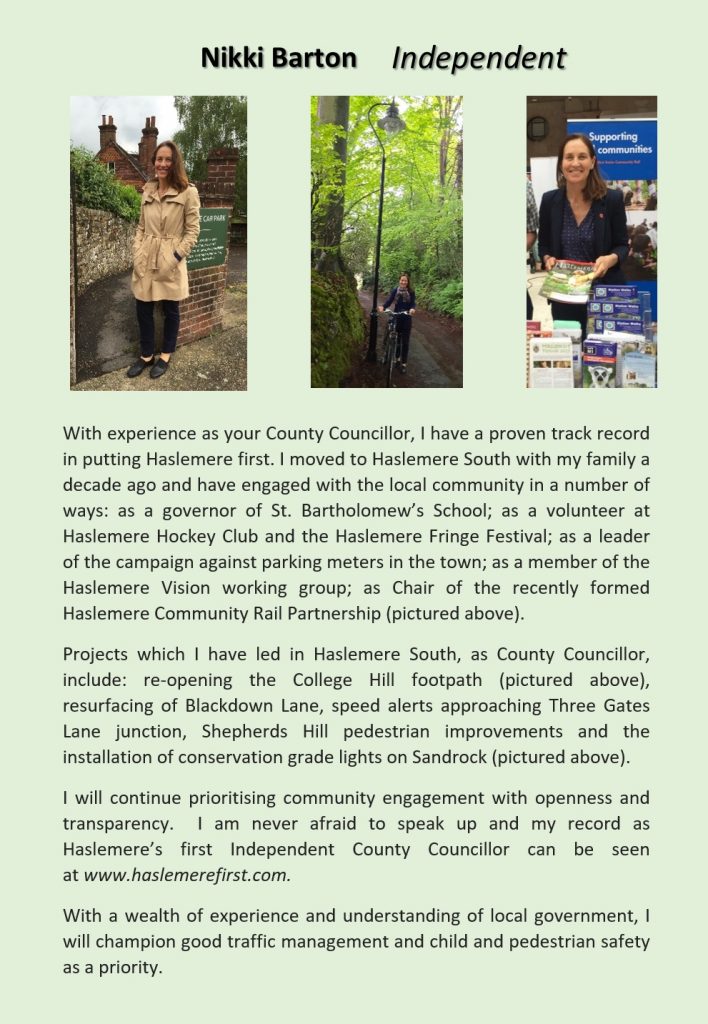 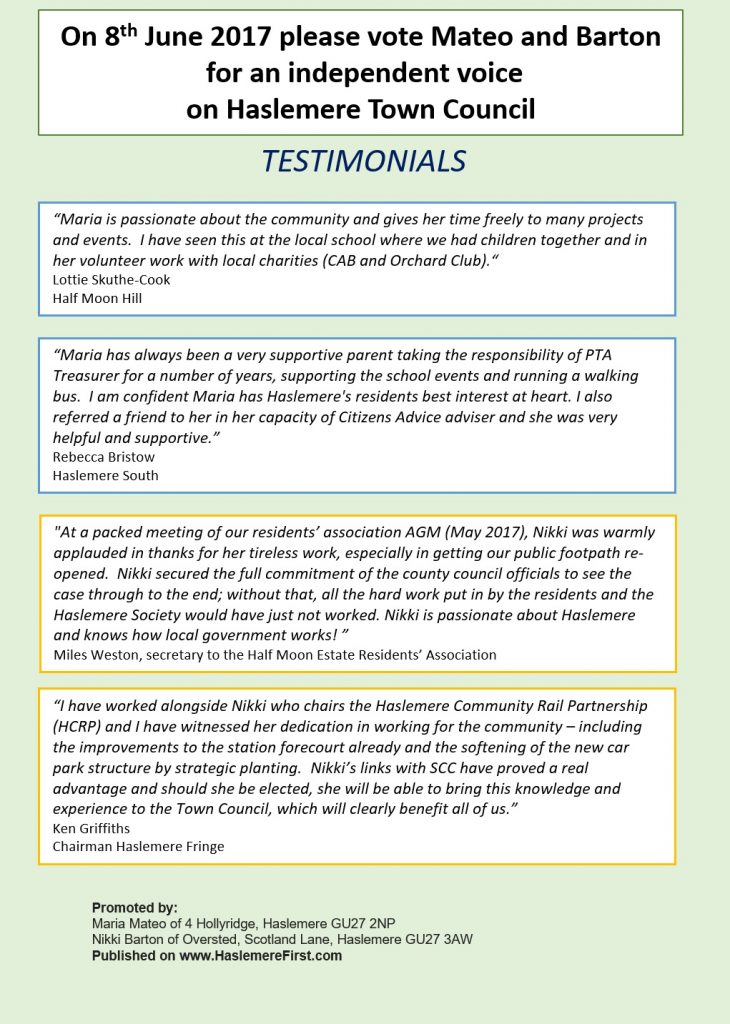 In March 2017,  the local press reported that three elected councillors – half way through their term – have resigned from Haslemere Town Council.

This has caused by-elections to fill these councillor vacancies including one by-election in the Haslemere South Ward (2 vacancies) where Maria Mateo and Nikki Barton live.

Mateo and Barton are your Independent candidates for this by-election.

On the ballot paper, which will be a green colour, you’ll see our names – MARIA MATEO & NIKKI BARTON – and there will be no party political logo; after all, we feel in a local election, local decisions should simply be about people, not political parties. 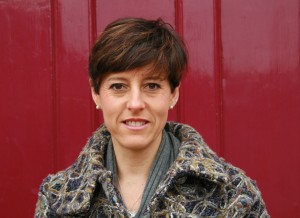 I care about Haslemere. My family have lived here for over ten years. I am actively involved in our wonderful community. I have worked as a solicitor and local adviser with Citizens Advice and now training as a Waverley Supervisor with this charity.

I’m a volunteer and have given many hours to several community groups (Haslemere First Respondents, Orchard Club, and Haslemere Rugby and Football Clubs). I organised a local school’s walking bus.

As your independent councillor, I will be open and transparent, listening to Haslemere residents and representing your views in the Council Chamber. 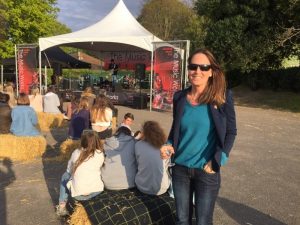 With experience as your County Councillor, I have a proven track record in putting Haslemere first. I moved to Haslemere South with my family a decade ago and have engaged with the local community through: school governorship; Haslemere Hockey Club; Fringe Festival; Haslemere Vision; Chair – Haslemere Community Rail Partnership.

I will continue prioritising community engagement with openness and transparency.  Never afraid to speak up and my record as Haslemere’s first Independent SCC can be seen via the pages of this blog.

With a wealth of experience and understanding of local government, I will champion good traffic management and child/pedestrian safety as a priority.

On Friday, I was interviewed by BBC Surrey, talking about what it was like to be a Surrey County Councillor.

At the end of the interview, I announced that Maria Mateo and I will be standing as Independent Councillors in the Haslemere Town Council by-election on June 8th.

Here is a clip of the interview: