An event for anyone who is considering standing as an independent candidate in the local elections in May 2021, election agents or anyone who has expressed an interest in being a councillor.

Due to the sensitivity of the event, individuals will need to sign up and they can do so via the following link: https://www.eventbrite.com/e/133243166899 The virtual conference details will be sent to signed up attendees closer to the date of the event.

We have an excellent group of speakers including:

Thanks to everyone who took part in my Facebook Q&A this evening. Click on the graphic below to read the questions and answers:

My letter published in The Haslemere Herald announcing that I am standing as an Independent candidate in the Surrey County Council by-election on 2nd May 2019. 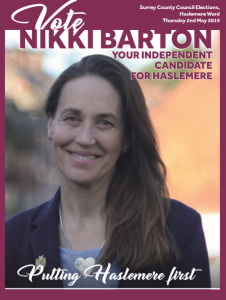 ‘Anger at absentee councillors’ was a shocking headline on your front page last month.  I believe it is totally unacceptable when councillors, who are paid out of our taxes, do not engage to serve the community that elected them.

It really matters because Surrey County Council is responsible for so much that affects our daily lives.  At this critical time when budgets are being slashed and key services are under threat, Haslemere needs councillors who are willing to show up and stand up for their community free from party politics – councillors who will actively lobby for Haslemere’s fair share of those scarce resources because their only priority is putting Haslemere first.

In 2013 I took the decision to stand as Haslemere’s first Independent County Councillor.  Many people thought this was a waste of time because every single Haslemere councillor at town, borough and county levels was a Conservative.  My determination came from my experience in the successful campaign to stop Surrey’s plan to put parking meters throughout our town, hurting local businesses, schools and churches.   I had been shocked by the lack of openness and transparency at meetings where (one) party politics dominated.

Winning the election was a ground-breaking moment, and a great honour.  I threw myself into the role with energy, and a deep commitment to serve the community with passion, transparency and engagement.  I worked hard, listened and built trust.  I hope readers of The Herald might take the time to read about my activities here: www.haslemerefirst.com/achievements.

As my youngest daughter prepared for secondary school, I decided to fill a seat on the town council rather than continuing at the county level.  But it was disheartening to watch as my successor’s absence meant that the relationships and momentum I had built for the town were being wasted.  Haslemere deserves better.

I have therefore decided to stand for election once again as an Independent candidate for Haslemere.

My priorities if elected again as your Surrey County Councillor will be:

Above all, I promise to put Haslemere first!

Maria Mateo will be standing as an independent candidate for the Haslemere South ward in the upcoming Haslemere Town Council by-election on 8th June.