My email to our Community Rail Partners:

I am delighted to let you know that we have been successful in obtaining funding from the Community Rail Network to deliver a project that aims to encourage people to jump on their bikes either for the first time, or to return to cycling to improve both mental and physical health while also increasing the use of the valuable town centre station car park spaces.  We will be offering heavily subsidised cycle training in partnership with Surrey County Council, free bike doctor repair sessions and guided cycle rides for all abilities from our partner stations (Haslemere, Milford, Witley, Godalming and Farncombe).

The project seeks to:

Make use of the station car parks at the stations within the Surrey Hills to South Downs Community Rail Partnership which are now often empty due to the reduction in commuter parking because of Covid restrictions – permission has been granted by SWR management to use station parking capacity within the Surrey Hills to South Downs CRP for both cycle training and bike doctor maintenance sessions.

Encourage station staff to get involved and use the training themselves. (This has been requested by the station manager, who fully endorses the idea of the project)

Surrey CC have agreed to deliver the training at a subsidised rate and are looking forward to working with us. They have already agreed that the bookings for the training can go through their website which is designed to take the bookings

East Hants Rail Partnership have also been successful in obtaining a grant so will work in partnership to promote this exciting project.

We plan to start the project in Spring 2021, depending on the Covid restrictions and look forward to engaging all partners in this exciting initiative.

I have submitted a question to The Leader of Surrey County Council’s ahead of full council next week.

The coronavirus (COVID-19) crisis has had a terrible impact on the lives and health of many Surrey residents, as well as severe economic consequences. But one of the consequences of the lock down also presents a rare opportunity to move towards our ambitious Climate Change target for transport of a reduction of in 60% emissions in the transport sector by 2035.

During the lock down, the quieter and less polluted streets have encouraged our residents to walk and given many who have never cycled before, a new confidence to get on their bikes.  Over several weeks, the lockdown has resulted in a level of behaviour change that most transport strategies can only dream of.

The recent Surrey Climate Change Strategy states that to achieve our goal of net zero carbon by 2050, we must act today to reduce our carbon emissions.  The strategy identifies the reduction in our transport emissions asfundamental to achieving this goal, stating the county will promote an integrated, accessible, affordable and reliable public and active (walking or cycling) transport system.

A shift to more agile working, the need to socially distance when travelling to work and the appreciation of the health benefits of cycling and walking indicate that this change in travel behaviour could be long term.  Many of my residents in Haslemere are very keen that this once in a lifetime opportunity is not missed.

Please could the Leader please explain how this council intends to ensure Surrey’s transport network support the recovery from the COVID-19 emergency to provide a lasting legacy of greener, safer transport?

Could the Leader outline how the Highways team are responding to new guidelines under the Traffic Management Act 2004, and the recent statement by Grant Shapps which expects local authorities to make significant changes to their road layouts to give more space to cyclists and pedestrians. Such changes will help embed altered behaviours and demonstrate the positive effects of active travel.’

Here is a link sharing the agenda of the Waverley Committee on Friday. All are welcome to attend.

I have sent apologies as I am attending a family funeral on Friday.

I would be very grateful if this statement could be read out on Friday at the LAC- item 8.

The proposed Cycle Tracks Order on a section of Footpath 19 is an initiative that has support from Haslemere Town Council, Haslemere Vision, Haslemere Community Rail Partnership (in partnership with the Surrey Hills and Cycling UK) and Transition Haslemere.  It is identified as one of the “opportunities” in the submission draft Neighbourhood Plan.

There is a growing community desire to improve the conditions for cycling in Haslemere and this is borne out in some specific ways:

Cycling in Haslemere is extremely challenging for all but the experienced, confident cyclist.  The main routes through the town are in many places narrow, with no space to accommodate a separate cycle lane.  Key pinch points include: Fosters Bridge near the station; the Wey Hill shopping area; and the high pavement section of Lower Street.  These are all particularly hazardous for cyclists.  Very significant funding would be required to address these challenges – funds that are currently not available to members of this committee.

A creative approach is therefore needed if we are to improve cycling in Haslemere within the existing physical and financial constraints, to encourage wider and safer participation.  An opportunity does exist in the form of the network of paths – both formal and informal – that criss-cross the town.  The strategic vision of the groups supporting the proposal today is to use these paths, linking up with some quieter roads where gaps exist, to create a safer, integrated network of cycle and walking paths.  This network would provide links between and among residential zones and key community assets, including our schools, health centre, sports centre, library and shopping areas.  The plan is to work with the Surrey Highways and Countryside teams to direct funds, as they become available, to upgrade sections of path and the linkages to create this network.

The proposal for consideration today and set out in the committee papers, is to upgrade a section of Footpath 19 via a Cycle Tracks Order.  This marks the first piece, so to speak, in this ‘jigsaw’ of a town-wide cycle and pedestrian network.  The route is already used by cyclists informally as it provides a back-route link from Lower Street near the station, through to both Lion Lane Green and Shottermill Infant and Primary school, and up to the National Trust Devil’s Punch Bowl where cyclists can connect to the extensive Cycle Surrey Hills cycle network, with 90km of off-road tracks.

A criticism of the proposal that has been received by Officers is that the Cycle Tracks Order creates a small isolated section of cycle route.  As explained above, this is intended to mark the first section of a wider strategic network of interlinking paths, which will be improved and upgraded as and when funding amounts become available.  The vision would then be to upgrade the next section of route from the end of the proposed length of path, to link it with both Shottermill Infant and Junior schools as the next piece in the ‘jigsaw’ once funding is secured.  Both Heads are working hard to promote ‘Safer Routes to School’ and more active travel by pupils and parents so as to reduce parking and congestion as well as to improve air quality and safety issues around their schools.

The scheme’s cost (£7,000) represents good value for money as it improves the off-road path for current users of the path, be they pedestrians, disability scooter users or cyclists.  The scheme will upgrade the path surface, widen the existing path and replace a rotten wooden barrier over the small stream which the path crosses.

The Surrey Highways and Countryside teams have assessed the scheme thoroughly and confirm that when upgraded the path will accommodate both cyclists and pedestrians, with signage to encourage mutual respect by all path users and “cyclists dismount” signs will be installed in front of the bridge over the stream.  The path will remain on the definitive map retaining footpath status, and the proposal is not opposed by the local rambler group.

Looking ahead, Waverley have plans for a housing development on the current Youth Campus site adjacent to this proposed upgraded section of path, which would therefore be directly accessible to residents in the new homes.

Two weeks ago, I was tagged in a Facebook post by David Elliott who works for The National Trust locally. The post was about a Critical Mass Bike Ride in Haslemere.

I was delighted to join so many cyclists, including lots of children in the first mass bike ride organised by Transition Haslemere. Below are some photos from yesterday’s ride which began at Shottermill Ponds and ended in Haslemere High Street.

The aim of the ride was to both raise awareness of the desire of many Haslemere residents to make cycling safer for all, and also come up with practical ideas as to how this could be done.   I have been a keen advocate of cycling over my 6 years as a county and town councillor. I fully support and encourage this initiative. I look forward to working with the group to take their ideas to Surrey County Council highways team to explore what can be done.  Given the urgent climate change agenda, the need to reduce traffic pollution in our town and the added health and well being benefits that cycling can bring, I believe this is the perfect time to give cycling the highest priority.

Work to improve the railway station forecourt in Haslemere by South West Trains (SWT) commences on Monday 4 July. The phasing and delivery has been planned to have minimal impact on how you currently use the forecourt and SWT have included night work to aid in this. 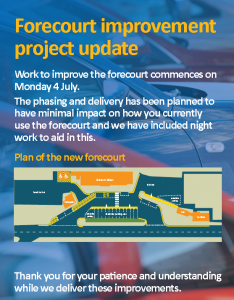 Do you have any ideas for schemes to improve cycling in Haslemere?

The Haslemere and Western Villages Task Group is meeting next week on September 17th to discuss the way forward for cycling in Haslemere and the surrounding villages, as part of the new Surrey County Council Cycle Strategy.

I am meeting with Surrey County Council officers on Monday, September 14th at Haslemere train station for a town cycle ride to identify ways in which the town could be made safer and more attractive for cyclists. If anyone would like to join us to share your ideas you would be most welcome. Please let me know your ideas and/or if you would like to meet via my Facebook page, Twitter, or e-mail on nikki.barton@surreycc.gov.uk. 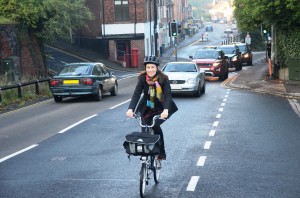 Transport Research Laboratory (TRL, www.trl.co.uk) are currently recruiting participants to take part in some Road Safety Trials. They are running the trials on behalf of Transport for London (TfL) at the Dunsfold Park Track (home of Top Gear) in Cranleigh, Surrey. More trials will be taking place during June this year and we are seeking more cyclists (aged 18 or over) to take part. The trials are scheduled for the following dates:

The approximate times for the sessions for cyclists are:

A reimbursement of £40 will be made on the day as compensation for your time and travel expenses.

Waverley Cycling Forum have asked me to publicise these trials so that we can recruit as many keen cyclists as possible to take part!

If you have any queries or would like any further information about the trials, please do not hesitate to get in touch with the Trials Team on getinvolved@trl.co.uk.