This is a post written yesterday, shared from the Haslemere & District Chamber of Trade & Commerce. The Chamber aims to foster economic growth in and around Haslemere by supporting its members through an expanding range of activities. Here is the application form to join. You can follow them here on Twitter –  @HaslemereChmbr. 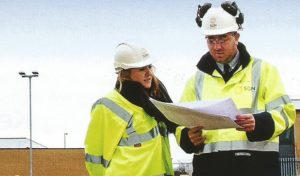 Utility companies are lining up for fresh projects involving roadworks around Haslemere – but this time they are taking note of concerns voiced by residents and local business.

Early next year, Southern Gas Networks (SGN) plans to start upgrading 11.5km of gas mains in and around the town. Later in the year, Scottish and Southern Electricity (SSE) is planning a vital cable renewal.

This morning, town councillors, the chamber president and an emergency services representative met with SGN and SSE for an outline of the proposed works and plans to minimise any impact on households, businesses and services.

With still-fresh memories of road closures and business disruption during – and after – previous gas main upgrades and road improvements, council and chamber stressed the importance of demonstrating that Haslemere is open for business.

SGN’s preliminary plans show a total of eight separate projects where gas mains need upgrading to meet modern standards of safety and reliability. Wherever possible, this will be done by inserting plastic liners into the existing pipes – a technique that is less disruptive for customers and road users.

Work on some of these projects is expected to start in January, with all scheduled for completion by August. Final details of the projects and their timings are expected to announced soon.

Chamber President David Goddin says: “The good news for local business is that most of the SGN proposals do not directly affect the retail and commercial areas. However, the need for temporary traffic lights and diversions may cause delays on some routes.

“With the town council we have asked for informative signage to help avoid perceptions that Haslemere is difficult to visit. In the months ahead, council, chamber and individual businesses will need to work together to send out a strong message that the town is still open. This can be achieved through a combination of joint promotions and publicity via businesses’ websites and social media channels.

“I would welcome comments from chamber members and any other local businesses who have concerns about the impact of proposed works – or who have suggestions for promoting the town in the year ahead.

“SGN has assured us that all the proposed work is essential, and is part of the Health and Safety Executive’s drive to have all cast iron gas pipes within 30 metres of properties replaced by 2032. Some of the pipes, we are told, date from the early years of the last century.

“It is clear that SGN has learnt a lot since its last visit to Haslemere and it is now placing much more emphasis on engagement with all stakeholders. The company is planning a major campaign to communicate with residents beforehand and to check that their installations are safe after reconnection. Customers can expect to be without gas supplies for an average of 4.5 hours.

“Turning to Lower Street, we are told this has to be closed to through traffic for the duration because the road is too narrow to accommodate a working site and a carriageway. It is most unfortunate that the cable  was not replaced at the same time as the closure for gas main replacement. This is a key thoroughfare and closing it for any length of time could have serious repercussions.”