Here is an update of some of my activities and Surrey County Council officers’ work for Haslemere over the past two months.

College Hill, safe pedestrian passageway behind Lloyds Bank, has been blocked by a local businessman who owns a ‘ransom strip’ between the highway and the Lloyds Bank car park.

Liaised with SCC Highways legal team and Haslemere Society members to prepare the required evidence for the passageway to be recognised as a definitive right of way. Many affidavits have been collected from Haslemere residents testifying a constant use of the path for 20 years. SCC Highways have recognised the health and safety issues of pedestrians walking up and down the hill. The case will be brought to the September Local Area Committee meeting for decision by Committee to proceed.

Additional anti-skid surface Grayswood agreed with SCC Highways, to be installed this month.

Woolmer Hill tree trunks on roadside, concerns have been raised over safety. Our Local Highways Officer is following up with contractor.

A parking sign in West street that was hit by a lorry has been repaired.

Items left by a resident around verge in Timbermill Court to deter parking have been removed at the request of the Community Highways Officer.

Officers advised a resident of a cost effective way of giving her wheelchair bound father better access to property on a private road (Chilcroft Road).

Japanese Knotweed in Scotland lane – this has been passed to Waverley Borough Council to deal with.

Several residential roads were visited by a gully cleaning gang in early May.

A number of highways projects (which are all aiming to improve pedestrian safety) have been delayed until the summer, due to resource constraints within the County Highways Design Team.

Visited Stepping Stones with Cllr Linda Kemeny, Cabinet Member for Schools, Skills and Educational Achievement. Received a warm welcome from the students. Also, had a tour of Undershaw to see how work is progressing on site. You can read about our visit here on the Stepping Stones’ website.

South West Trains Student Fare Card scheme in response to requests from residents, successfully lobbied to extend the Student Fare Card for 16-18 year old students travelling by train from Haslemere to Liss, Liphook and Petersfield. This new concession will start in Sept 2015. Here is a letter from a resident regarding the concession: SFC resident letter to press.

Herons Skate Park, March 11, 2015 – attended the opening of the newly refurbished skate park, now a fantastic facility for young people in Haslemere and the surrounding community. Supported the successful bid for SCC Community Improvement funding for the project. Also, funding was provided by Waverley Borough Council. 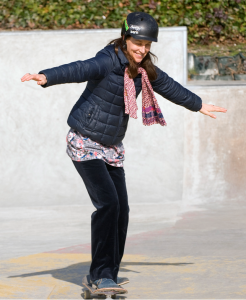 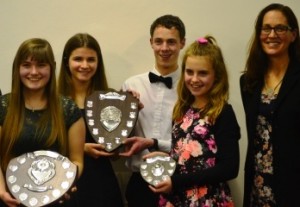 Haslemere Library Kids Book Group, March 7 2015, (haslemerekidsbookclub@hotmail.com), met local children’s author Kelly McKain, children fascinated understanding how Kelly writes and illustrates her books. The event was supported by the library Art and Craft Fund to which I have awarded two grants from my Member’s Allocation.

Attended Haslemere Town Council’s Annual Awards Ceremony. It was gratifying that a few Award Winners had been recipients of my Surrey County Council member allowance.

Public meeting to discuss proposed housing development at the top of Lion Lane, Haslewey, 11 May 2015.

Cheered cyclists over the finishing line at Little Lumpy, 17 May 2015. 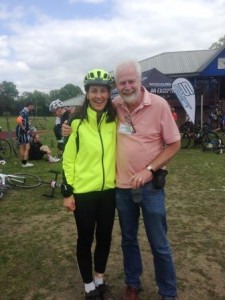 SCC Place and Sustainability Team and Sustrans (www.sustrans.org) March 11, 2015 to discuss commissioning a travel plan for Haslemere train station. SWT will be providing a new bike hub for 100 bikes, the forecourt is to be reconfigured and additional station parking may be provided. In the light of these changes I believe an integrated travel plan is needed, to improve linkages for all transport modes between the station and the surrounding town.

Haste Hill resurfacing delayed until 9th June as Thames Water need to carry out work on a pressure valve. This work is part of the Project Horizon scheme.