Two South Western Railway (SWR) stations are in the running to be crowned ‘Station of the Year’, as part of the National Rail Awards (NRA) 2020.

The judges were impressed by Templecombe station in Somerset and Haslemere station in Surrey, with both being shortlisted earlier this month.

The Friends of Templecombe Station – a long established adoption group which has worked closely with the SWR member of staff at the station – has continued to produce beautiful flower displays which are on show across the site, including on the disused platform. They also host monthly coffee mornings in the station’s waiting area, supporting passengers and the local community alike.

The station has history with the awards, having been highly commended in this category in 2018 and winning in 2019.

The local station adoption group at Haslemere has worked closely with the SWR team to install new flower displays, a defibrillator and artwork produced by local schoolchildren. They also received funding and assistance from a variety of teams across SWR to completely refurbish the volunteer-run Information Hub, which is leased on a peppercorn rent.

Commenting, SWR’s Head of Stations Jerome Pacatte said:
“Our station colleagues and local community groups work incredibly hard to maintain and enhance our stations, and in doing help to enhance the overall experience of using our network.

“It is fantastic that the teams that help to maintain both Templecombe and Haslemere stations have already been recognised by the National Rail Awards. This is richly deserved, and we are all wishing them the best of the luck for the next stage of the competition.”

With thanks to the volunteers at the Haslemere Information Hub for putting this slide show together.

This notice is on display at Haslemere station 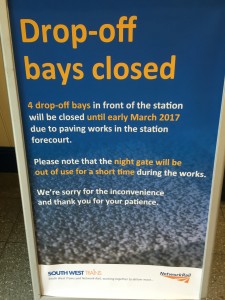 Also, this leaflet is available at Haslemere station regarding changes to train services from Haslemere during improvement works at London Waterloo, 5th – 28th August 2017. 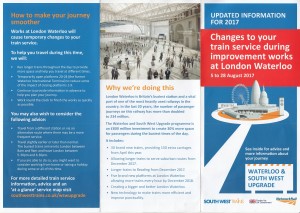